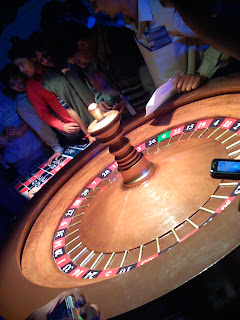 This weekend we had Megabucks the reinvented business festival of IIT Kanpur. This time the festival boasted of a lot from 4crore of seed money to performers like Niladari Kumar. Well in case you haven’t heard of Sitarfunk or Mr. Niladari he is the guy who plays metal on sitar and shares cakes with the audience on the event of a band member’s birthday. Is that great or what…….

Apart from all this we also had a temp Casino set up with roulette tables, black jack and many more casino games. Now gambling is illegal in India so we were given fake jobs and money. After tripling it or loosing it all as in my case one could get real stuff at an auction………….and yes the fake money was used. Well need less to say the job lottery was pretty accurate and Ravi’s true potential was recognized and he was made a sub-inspector.

Before I forget in all the fun and frolic I got a chance to see Mc Faryland Caryle. He was my English teacher in Lucknow and those of you who have met him will know why I have mentioned him here.

Singing off now
Shubham
and AUKAT ME RAHO*

*It really pushes my buttons when someone tell me that and hope it has the same affect on you and then you work hard to prove me wrong :)

and yes most important of all…….don’t forget to leave comments.