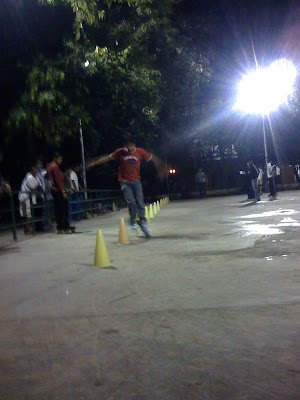 slalom race on the wet rink: it was awesome, watching us skate the crowd went nuts.. 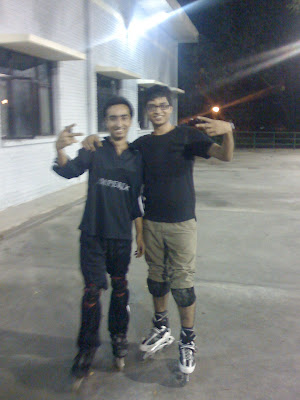 Puneet and me after the race

After months of nagging we finally have approval to buy new skates for the skating club. I really appreciate Ahbishek Tiwari’s efforts for allotting the funds. I know he has taken some very tough decisions to make this happen. We all (participants and the coordinators) are very excited about this new development. With the flood lit skating rink, new instructor and new skates the skating club is fast moving out of the developing stage. The new coordinators are taking charge now and heading full on to make the club a phenomenon. A phenomenon I am really lucky to witness.

At a place like IIT Kanpur many new and revolutionary things keep happening and if you get to be a part of just one of them you are really lucky. I have been a part of three. The skating club for one has touched over 800 students and showed them a new ways of falling head over heals :). The YES!+ course started happening when I was in my second year and now has become the most popular course on campus. It has transformed the lives of hundreds of students on campus taught them how to smile even after a bad quiz

and go make a difference in the society they live in. From setting up schools in far fetched corners of the country (eg. the one in Aur Wand Tand, a naxalite hit area, by Rajesh Jasaia and ass.) to planting over a 100 million trees. Now that I have mentioned YES!+ I’ll do another in-depth report about YES!+ and its side effects ;). The third is Sumeru Sandhya/Anantrang. More about that too, but later.

Getting back, as for the skates, we are planning to get inline skates from Yonker. They have a great soft skate shoe, steel wheel frame and ABEC-5 speed bearings. All in all they are the perfect pair of skates to start on. I wish I had these when I started. If you have any suggestions or need tips buying new ones do get in touch. I would love to hear from you.

Another update: A few weeks back during Udgosh 08, our inter-college sports festival the club had organized a couple of skate races. I came in first in the 500m forward and 200m back skate race. Rajat won the slalom race which was a real challenge as it was raining and the skating rink got wet. 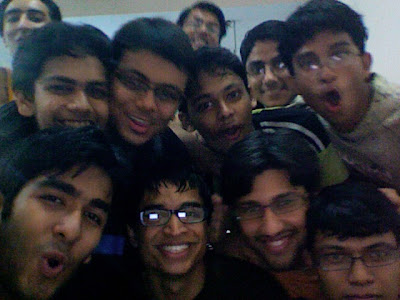