Sleeping your way to success 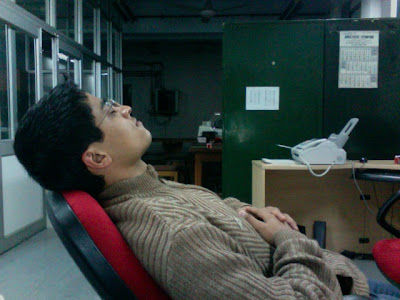 My secret mantra for success has now also been proved by research.

The next time someone gives you a hard time about sleeping in, say you were hard at work figuring out a difficult problem. Findings published today in the journal Nature provide experimental evidence that the old adage “sleep on it” actually has merit.

Ullrich Wagner of the University of Lubeck in Germany and his colleagues assigned people a mathematical puzzle consisting of a string of eight numbers. The scientists provided the subjects with two rules by which to generate a second string of numerals. In addition, a shortcut, which the researchers did not divulge, could be used to arrive at the target answer. After initial training, some participants were allowed to get a good night’s sleep while others remained awake. When they returned to the problem eight hours later, those who had slumbered were twice as likely to find the shortcut as were those who hadn’t slept. Members of a second group that trained in the morning and attempted the problem again later that day were also slower at finding the shortcut, suggesting that tiredness was not a factor for the poor performances.

Just what kind of sleep–rapid-eye-movement (REM) versus non-REM sleep, for example–is best for tackling tricky puzzles remains unclear, as does the role dreaming plays in solving problems while sleeping. But Pierre Maquet and Perrine Ruby of the Cyclotron Research Center in Belgium note in an accompanying commentary that “at the very least, Wagner et al. give us good reason to fully respect our periods of sleep; especially given the current trend to recklessly curtail them.”