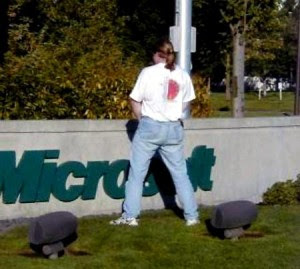 Three engineers were in the bathroom standing at the urinals. The

first engineer finished and walked over to the sink to wash his hands.

He then proceeded to dry his hands very carefully. He used paper towel

hands was dried. Turning to the other two engineers, he said, “At Microsoft, we are trained to be extremely thorough.”

wash his hands. He used a single paper towel and made sure that he dried

his hands using every available portion of the paper towel. He turned and

said, “At Linux (Gentoo), not only are we trained to be extremely thorough,

but we are also trained to be extremely efficient.”

The third engineer finished and walked straight for the door, shouting over

his shoulder, “At Apple Computer, Inc. we don’t pee on our hands.”