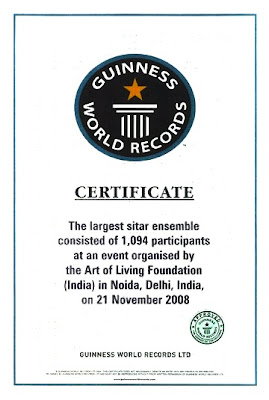 Zee News, 21st January, 2009The grand symphony of the Art of Living which gave platform to 1094 sitarists in the presence of Sri Sri Ravi Shankar, has entered the Guinness Book of World Records.

The proceeds of the event, titled Brahm Naad, went towards helping victims of the recent Bihar floods. Held in Noida near Delhi on November 21, 2008, the event was organized on a large scale and got a huge response.

Inspired by Sri Sri, the 2-day programme envisaged re-enforcing the unifying power of music in spreading global peace and harmony.

Speaking at the programme, Pt. Shiv Kumar Sharma, noted santoor exponent said, “This is a miracle happening. This has been possible due to the blessings of Sri Sri. I am privileged to be here.”

At the event, Sri Sri was felicitated by Live Earth, which has been founded by Kevin Wall, in partnership with former U.S. Vice-President Al Gore, to high- light the notable work done by the Art of Living for the Mission Green Earth Stand Up Take Action 2008 – a project which envisages the plantation and nurturing of 100 million saplings, across the globe, to help reduce global warming.

The music for this 1000-piece sitar orchestra was based on ancient ragas from the Gandharva Veda.

The Art of Living has been involved in the relief & rehabilitation of the state of Bihar, through its volunteer network, at flood hit districts of Khagaria, Katihar, Purnia, Bhagalpur, Arariya, Madhyapura, Supoul & the army medical camp in Narpatganj. Having mobilized relief materials worth Rs 10 crore, His Holiness Sri Sri Ravi Shankar has pledged to raise Rs 40 crore for the rehabilitation of the flood victims. 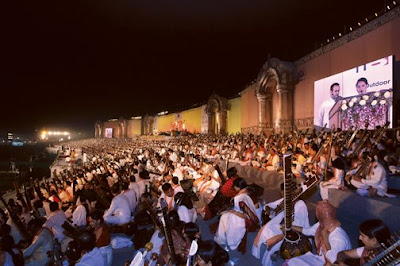