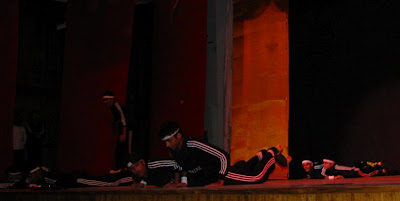 So many updates……..so little time. Actually thats not true. Its just that I have been acting lazy all week.
Last weekend the skating club performed in the Dance Extravaganza 08 (DE). I think it happened for the first time in the history of DE that non performers went on stage and rocked, after all we had a superb choreographer Nitish and two great managers Hemant and Adarsh. The three are coordinators for the club now. The Dance club was really supportive to put their faith in us.
I remember when Nitish proposed for a skate dance exactly 13 days before the event. We didn’t have props, people or the time. But we decided to go ahead with it. We’ll thats the way we do things here at IITK. Finally by the time of the show we even had sponsered dresses!!!
I must say the participants did a great job. Most of them picked up skakes for the first time, but became so good over the week that even most of experienced ones were left behind by their vigour and valler. The jumps they made, the trust in their team members to let them jump over them and what not.
Check out the pictures here: http://picasaweb.google.com/shubham.goel/SkateDanceDE08